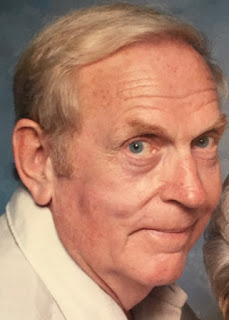 BELMONT - Wayne Bidwell, 98, of 4967 State Route 19 S passed away on Tuesday, September 8, 2020 at Jones Memorial Hospital in Wellsville with his family at his side. He was born May 23, 1922 in Friendship, the son of the late Eugene Talbert and Victoria Mae (Hall) Bidwell. On December 31, 1949 in Niagara Falls, NY he married Dorothy Regina Bolents who predeceased him in 2006.
Wayne was raised in Friendship and attended school in Friendship and Bolivar. He was a veteran of WWII serving with the Army Air Corps from 1942 to 1946 as a teletype operator. He received the Good Conduct Medal and the Victory Medal. He was employed by the H. F. Darling Construction Company throughout the Niagara Frontier, including the Niagara Falls Power Project from 1957 to 1962. In 1963 he moved to Belmont where he and Dorothy opened and operated Bidwell's Grocery. In 1975 they open Bidwell's Deli in Fillmore, and from 1975 to 1992 he worked for the Maintenance Department at the Allegany County Court House. He was a member of the Herbert W. DeLong American Legion Post 808. He enjoyed carpentry, woodworking, and caring for his home and garden.
He was a quiet man, a loving husband, father, grandfather, and great-grandfather. He was always ready to lend a helping hand to family and friends. He loved his work and loved his pets.
He is survived by a son, Richard Wayne (Ellen) Bidwell of North Tonawanda, and a daughter Marta Lynn Whitney and her companion, Mark A. Latzer of Belmont, eight grandchildren, five great grandchildren, and several nieces and nephews. He was predeceased in addition to his parents by four brothers, two sisters and a number of nieces and nephews.
Friends are invited to call on Friday, September 18, 2020 from 2:30 to 3:30 p.m. at the J. W, Embser Sons Funeral Home Inc., 17 Schuyler Street in Belmont. The funeral will follow visitation at 3:30 p.m. in the funeral home with Pastor Marc Chamberlain presiding. Burial with military honors will be in Forest Hills Cemetery. Please consider memorial donations to the American Macular Degeneration Foundation (AMDF) P. O. Box 515, Northampton, MA 01061-0515. To leave online condolences, please visit www.embserfuneralhome.com.
at 12:17 PM