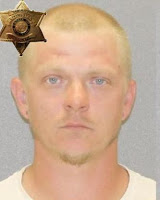 York: Livingston County Sheriff Thomas J. Dougherty reports the arrest of an Andover, NY man after a traffic stop in the Town of York. On June 9, 2017 Deputy John Morgan stopped a vehicle on Genesee Street for speeding 55 mph in a 40 mph zone as well as the vehicle swerving into Deputy Morgan's lane as their vehicles approached each other.
The Deputy Sheriff interviewed the driver, 31-year-old Charles A. Buchholz, and became suspicious that he was operating the vehicle under the influence of drugs. It was alleged that Buchholz was texting on his cell phone while he was driving the vehicle.  The subsequent investigation included standardized field sobriety tests and also revealed that Buchholz was in possession of several bags of heroin and a hypodermic needle. Deputy Brandan Flickner, a Certified Drug Recognition Expert, assisted with a drug evaluation of Buchholz and in his expert opinion alleges that Buchholz was under the influence of a central nervous system stimulant and could not operate a vehicle safely.  Buchholz was arrested for Driving While Ability Impaired by Drugs, Criminal Possession of a Controlled Substance in the 7th Degree, Speeding, and Illegal Use of a Cell Phone While Driving.
Buchholz was turned over to Central Booking Deputies at the Livingston County Jail for processing and pre-arraignment detention.
Buchholz was later arraigned before Judge Porter in York Town Court.  The Judge remanded Buchholz to the custody of the Sheriff on $1,500 cash and $3,000 bond.
at 7:03 PM