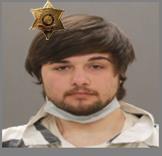 GROVELAND - Sheriff Thomas J. Dougherty reports felony level assault charges for a Geneseo man after a domestic incident.
Mario A. Ramirez, age 26, was arrested and charged with felony Assault in the Second Degree. The arrest stems from a domestic incident that occurred at a residence in the Town of Groveland on April 22, 2020.
At approximately 8:18 p.m. on April 22, 2020, the Livingston County Emergency Communications Center (E-911) received a call for a male who was struck in the head with a jack stand. Several members of the Sheriff's Office responded and through the course of the investigation, it was discovered that a 61-year-old male had been involved in a physical altercation with Ramirez.
The investigation alleges that Ramirez attacked the victim after a verbal argument, striking the victim with a metal jack stand, causing injury. Ramirez then fled the scene. The victim was transported to Noyes Hospital where he received numerous stiches to treat the injuries.
Ramirez was interviewed the following day and subsequently taken into custody for Assault in the Second Degree. Ramirez was transported to the Livingston County Jail where he was processed and held pending arraignment in CAP Court. The District Attorney's Office was contacted due to the felony level charge and a bail recommendation of $2,500 cash or $5,000 bond was provided.
Ramirez was later arraigned in CAP Court by Town of Mount Morris Justice David Provo. The Judge did release Ramirez on his own recognizance with a future appearance date set, and Deputies released.
Investigating for the Sheriff's Office were members of the Patrol Division, Criminal Investigations Division and Forensic Identification Unit (FIU), with the assistance of the Communications Bureau.
at 9:16 AM