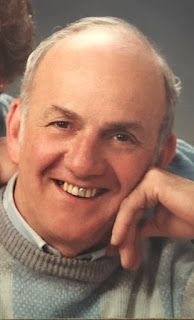 Ernest L. “Ernie” Mahon:  Loving Husband, Father, Grandfather
Ernest L. “Ernie” Mahon, 83, of 4203 Witter Road, Cuba, peacefully passed away Tuesday, April 28, 2020 at home.
Born on November 23, 1936, he was the sixth of nine children born to Alonzo and Gertrude Dow Mahon on the family farm in Austin, Pennsylvania.  On January 7, 1956, in the Coudersport United Methodist Church he married the former Virginia A. “Ginger” Tingley who survives.
Ernie was a graduate of Austin High School Class of 1955.  After high school he worked in the West Virginia Oil Fields.  Returning to the area, he began working for Market Basket Stores as a produce manager. He retired as a Regional Supervisor and Manager in 1998 after 41 years of service.
Ernie left the farm but did not leave his work ethic or green thumb behind.
He loved flower and vegetable gardening, boating and fishing, especially in northern Maine. He also enjoyed tinkering in his workshop, bird watching and was a lifelong Yankees fan.  He and Ginger enjoyed hosting large family gatherings.   Ernie was known as our baby whisperer. Babies were drawn to his calm reassuring presence.
He attended the Cuba First Baptist Church. Surviving in addition to his wife of 64 years Ginger, he is survived by: 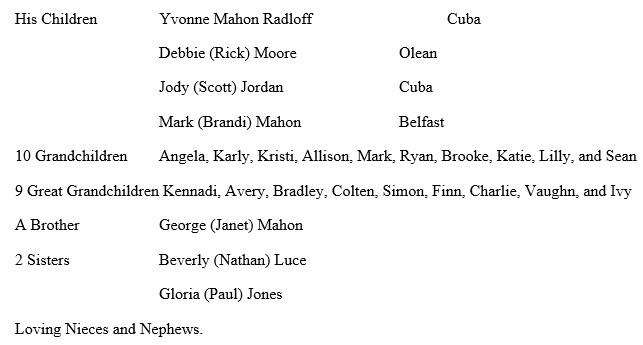 In addition to his parents, he was predeceased by a son Steven Mahon, two grandsons Alexander Kristoff Radloff and Lee Michael Desmond, his brothers Leonard, Fred, and Russell, and two sisters Jean Nasto and Alma Fowler.
Private services will he held at a later date.
Arrangements are under direction of the Mark F. Rinker Funeral Home & Memorial Services, Inc, Cuba.  Online expressions of sympathy may be sent to the family at www.rinkerfuneralhome.com.  CRCS Outdoors, 5476 Rte. 305, Cuba, NY 14727 or to the Crohns & Colitis Foundation of America at www.CCFA.org.
at 4:37 PM