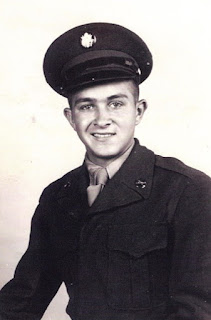 Rushford-Dewey John Perry Jr. of 8958 Lower Street, died Sunday, April 26, 2020 in Cuba Memorial Hospital. He was born on February 24, 1930 in Oakland, a son of the late Dewey and Ruth Pennock Perry Sr. On Dec. 23, 1948 he married Bernice Sylor who survives.
Dewey was a Veteran of the United States Army serving from 1948 to 1952.  During his first years in the Army Dewey was stationed in Occupied Japan until he returned to the United States in April of 1950. On October 22, 1950 he was recalled to serve in the 25th Infantry Division. During his service he earned three Bronze Service Stars.
He was member of the D. Victor Thomas Post No. 1155 of Fillmore, the Franklinville VFW Post 9487, the Short Tract Fire Department and the Short Tract United Methodist Church. Dewey enjoyed fishing, telling bad jokes repeatedly and working hard as a truck driver to provide for his family.
Surviving in addition to his wife are his children. Loriene (Pete) Fuller of Caneadea, Rondus (Paul) Miller of Fillmore, Lyall (Becky) Perry of Georgia, Kevin (Peggy) Perry of Java Village, nine grandchildren, 18 great-grandchildren, two great-great-grandchildren, a sister, Arlene Linderman of Hinsdale and several nieces and nephews.
In addition to his parents he was predeceased by a son, David Perry, a grandson, Scott Fuller, two brothers, William Perry and Robert Perry and a sister, Suzy Baker.
A private service will be held at the convenience of the family. Burial will be in Short Tract Cemetery, Short Tract.
Memorials if desired to: Short Tract Fire Department.
at 4:54 PM