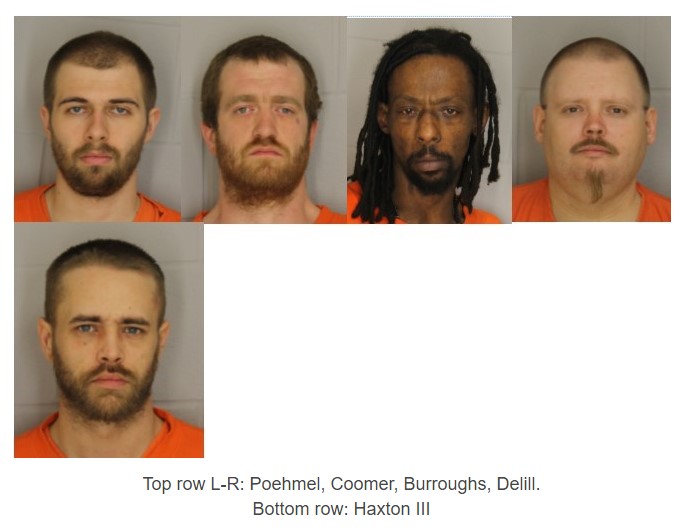 Five of the eight defendants charged with the brutal murder of 23-year-old Nicholas A. Burdge at an apartment on North Main Street in Wellsville last March were in Allegany County court Wednesday, where they accepted deals and pled guilty to lesser crimes. Initially, most were charged with second-degree murder.

Burdge was tied to a chair and savagely beaten, repeatedly. His body was later dumped in the Genesee River in Willing, where it was discovered the following day.

One by one, beginning at 9 a.m., the defendants were brought into the courtroom, where Wellsville Regional News was the only media outlet covering the daylong event.

Juvenile: The first person brought before Judge Thomas Brown, who presided over each appearance, was a teenage boy, who may be granted Youthful Offender status. He accepted a deal and pleaded guilty to misdemeanor assault and agreed to a probation term of three years. Each time the judge asked him if he understood, he replied “yes sir.” He admitted that he struck Burdge with a closed fist several times, intending to cause injury. He is currently under house arrest and his stipulations were also relaxed. He will be formally sentenced March 24.

Dylan L. Coomer of Wellsville: He pleaded guilty to first-degree manslaughter and accepted a sentence potential of 16 years in state prison and 4 years of post-release supervision. Wearing his orange jail jumpsuit, he also answered each question, “yes sir.” He told the judge he hit Burdge with a closed fist, many in the face. He said he saw the victims face was “swollen and bloody.” He admitted that he intentionally attempted to cause serious physical injury. He will be formally sentenced March 24. At times, family members were visibly upset as they listened to the testimony. The DA victim advocate provided tissues for the tears.

Richelle L. Kyser of Wellsville: She entered an Alford plea to the crime of second-degree attempted gang assault, with a potential sentence of seven years in state prison. An Alford plea is a guilty plea in criminal court, whereby a defendant in a criminal case does not admit to the criminal act and asserts innocence. If she continues to cooperate with prosecutors, the conviction could be modified to felony tampering with physical evidence, with a potential prison term of 1-4 years. Formal sentencing will be March 24th.

Kristopher Delill: He pleaded guilty to felony second-degree assault with the final sentence, potentially 2-7 years, left up to the discretion of the judge. In addition, with the plea, an outstanding probation violation charge will be dismissed. He admitted that he intended to cause serious physical injury by blunt force trauma. He will be formally sentenced March 24th.

Brandon J. Poehmel, Wellsville: Represented by Alfred attorney Peter J. Degnan, this case was adjourned, noting that the defendant was not ready to take the deal. Degnan said his client needs “more time to consider.” He asked for a postponement until February 24th. Granted. The deal offered to Poehmel was 15 years in state prison and five years parole with the plea to manslaughter 1st.

Lawrence C. Haxton III, Wellsville: He agreed to a plea of manslaughter 1st with a sentence between eight and ten years. His defense attorney attempted to strike a last minute, better deal, but there was no traction. His attorney said his client testified at a grand jury and “was truthful.” He said if the case went to trial, his client could do better. The judge said he wouldn’t shift from the state prison sentence and Assistant District Attorney Mike Finn said, “I won’t ask for less.” Haxton told the judge he struck the victim in the face and after he was duct taped to a chair, he kicked the chair over.  He said he witnessed others hit the victim. After more back and forth with the attorney, prosecutor and judge, Haxton entered his guilty plea. He will return to court in March for additional conversations.

Still unresolved: Poehmal’s deal is pending. Two other defendants face a potential trial. ADA Mike Finn told WRN that another juvenile and Howard Burroughs of Wellsville have “confirmed not guilty pleas." They have both been indicted for murder and manslaughter. Finn told WRN that today was “a big step toward justice in this case.” However, the victim’s mother, Teri Stanton of Olean told WRN that “Nick deserves better…they should be going for the maximum sentence allowed by law." She added “it just seems like everyone wanted to do everything the easy way…and I think he deserves better than that.” Her final thought about her son..."everyone loved him."