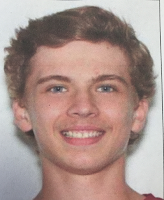 The trial for an Allegany county teen, accused of killing his parents in November 2019 and then torching the Clarksville home where they all once lived, is expected to begin before the end of the year. William J. Larson Jr. is charged with two counts each of murder and manslaughter. Last November, State Police allege that the teenager killed his parents and then set the home on fire to cover up the crimes. He has been indicted by a grand jury. At the time of the crime, he was age 17 and was placed in a secured youth facility in Erie County. Since then, Larson turned 18-years-old and was transferred to the Allegany County Jail, where he is presently housed. There is no bail.  There has been no notice of the intent by the defense to challenge Larson’s mental competency or claim an “insanity” defense. During one court hearing, a police video was presented where the teenager claimed his father killed his mother and then threw a knife at him. The teen claimed his father sometimes used meth. Larson continued to say during the interview that he shot his father while he was standing in the driveway. Although no trial date has been set, court sources say the case is ready for trial and would likely be conducted this year, January 2021 at the latest.